The deal isn’t totally done, but the Anaheim City Council early Wednesday, Sept. 30, approved the terms on which they’ll sell the city’s biggest asset, Angel Stadium, and allow the surrounding property to be developed with thousands of homes, offices, shops and restaurants that are expected to generate millions in revenue.

The council’s vote, which came at the end of a more than seven-hour meeting, was not a surprise – a majority led by Mayor Harry Sidhu in December agreed to the framework of the deal, and their public comments have been supportive of the details that were unveiled earlier this month.

When the sale closes, likely in late 2021, the city will turn over the stadium and the 150 acres on which it sits to SRB Management, Angels owner Arte Moreno’s business partnership, in exchange for $150 million in cash and another $170 million in community benefits that include 466 units of housing for lower income residents and a 7-acre public park that is expected to be a showpiece.

Sidhu, who helped negotiate the deal, said any city council would be happy to make a deal like this, with a projected 30,000 construction jobs and 45,000 permanent jobs, a walkable development with 15% affordable housing, a high-quality urban park and a long-term commitment from a Major League Baseball team to play in town.

“I truly believe residents for generations to come will thank us for (this), and actions we take tonight will truly benefit all residents in our city,” he said.

In a statement, SRB Management spokeswoman Marie Garvey said, “Tonight was an important vote by the City of Anaheim and will secure a long-term home for the Angels. While there are still more steps to go, we are pleased that the Stadium Development Plan continues to move forward. In the future, this property can play a key role in Anaheim’s recovery by creating thousands of jobs and building an exciting destination and community for residents and fans.”

Two council members, Denise Barnes and Jose Moreno, have been critical of the deal, which they say grossly undervalues the property and deprives the city of millions of dollars that could be used to fund services and programs that benefit all Anaheim residents. They cast the only two no votes Wednesday.

Barnes tried to postpone the issue until the city holds an in-person public workshop, but only Moreno supported that suggestion. The city held three online town halls this month at which residents could submit questions, but no in-person meetings have taken place since March due to the pandemic.

Moreno continued to question whether the deal was negotiated appropriately, and he objected to crediting SRB Management about $46 million for a park that would be a selling point in what’s expected to be a high-end development.

“It’s not only a community benefit, it’s a benefit to the developer,” he said. 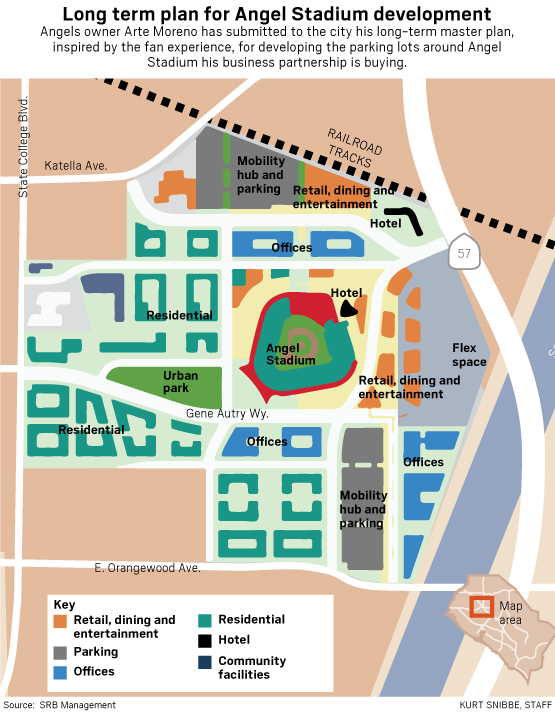 Some residents and Angels fans have applauded the deal, in part because it includes a commitment agreement that locks the team into playing in Anaheim at least through 2030 (the owner could face a penalty of at least $100 million if the team were to leave early). It also provides for Moreno to either renovate or replace the 1966 stadium, but no decision on that has been announced. The city will be out of the business of maintaining the stadium.

But others, including two former Anaheim mayors, have been critical of what they said is a rushed process with limited public input, and they have questioned why the city is crediting the buyer for millions of dollars in housing and park space, benefits that in some other cases have been negotiated at no cost to a community.

Anaheim officials have noted that the city has no affordable housing mandate requiring a percentage of housing be designated for lower incomes and the 7-acre park is in addition to smaller parks that help the development meet city requirements for new construction.

Moreno also unsuccessfully sought to tweak the language of the agreement that commits the Angels to play in Anaheim for at least 30 more years, citing what he said might be a loophole that could let the team go elsewhere in Orange County.

In 2006, the city lost a lawsuit over the team’s name change to “Los Angeles Angels” when a court determined the lease language allowed it. This time, city staff told the council SRB officials had already agreed to shore up the promise to remain in the city, making Moreno’s suggested change unnecessary.

The city has already been paid $5 million from the sale and may get another $45 million as soon as October. The remainder of the cash payment would come in $20 million installments over the next few years after the sale closes. The council still must take a second, procedural vote on the sale deal, expected at its next meeting.