PENSACOLA, Fla. — Massive National Guard trucks navigated subdivisions engulfed by raging floodwaters. Hundreds of people were rescued from flooded homes and cars. And on one suburban street, a family of four was found clinging to a tree as the murky brown rainwater unleashed by Hurricane Sally early Wednesday swirled below.

Through the downtown streets of Pensacola water gushed like a river, the flooding at one point reaching higher than five feet. A portion of a major bridge spanning the bay was wiped out. And more than 400 people were rescued from across Escambia County, which includes the city of Pensacola.

“We weren’t expecting it,” said Peter McDavid, who owns a reception venue next to a marina in Pensacola, where a big blue sailboat had smashed into the railings of the deck and where water had invaded from flooded streets and a broken skylight.

Sally, a stubborn storm that churned as slowly as 2 miles per hour over the Gulf of Mexico for two days, slammed into the Florida and Alabama coasts with an unexpected fury. The storm had been unpredictable from the beginning, evolving repeatedly in recent days in its projected path and strength. As it neared landfall on Wednesday morning, it escalated into a Category 2 hurricane and suddenly veered east, battering the Florida coast.

“I think many of us were beating ourselves up first thing this morning,” said David Morgan, the sheriff in Escambia County, citing forecasts that had the storm striking Alabama and Mississippi. Instead, it unleashed “devastating effects” on the area, with flooding expected to reach near record levels.

Sally had been defined in large part by its sluggish pace, camping out over Gulf waters made warmer than usual by climate change and chugging tediously toward the coast. Just as forecasters feared, the storm maintained its dawdling speed as it crossed over land, leaving residents to hunker down while 105 m.p.h. winds ripped roofs from homes, snapped trees, deluged streets and left hundreds of thousands of people without power.

The Pensacola area had already seen more than two feet of rain from the storm this week before it made landfall, and meteorologists said that up to 35 inches could fall in coastal communities. Officials said the region also faced the threat of river flooding, particularly on the Perdido and Escambia Rivers.

Sally made landfall at around 5 a.m. Central time over Gulf Shores, Ala., weakening to a tropical storm as it passed through the Florida Panhandle and back into Alabama. But its deluge was not forecast to let up any time soon; the storm’s heavy rain extended into western Georgia as of Wednesday evening, and it was continuing to crawl northeast at about 7 m.p.h.

Parking lots in both states looked like ponds, and hurricane-force winds continued to pound homes and businesses.

In Pensacola, the largest city near the Florida and Alabama state line, the conditions made it difficult to immediately assess the extent of the devastation, yet it quickly became evident that Sally stood to be among the most destructive storms to hit that part of the coast in recent years. Mayor Tony Kennon of Orange Beach, Ala., said one person had died as a result of the storm.

As the sun began to peek through the clouds, videos from residents and local media outlets showed images of homes that had been ripped apart by the howling winds, boats torn from their moorings and power lines downed in many towns and cities. According to the National Weather Service, a casino barge near Coden, Ala., broke loose because of strong winds and storm surge and slammed into a dock.

Hurricane Sally struck on the 16th anniversary of Hurricane Ivan, a Category 3 storm that dumped about 16 inches of rain on Pensacola and was among the most powerful to hit the region.

“Man, it just unloaded,” Tim Booth, a semiretired truck driver, said of Sally as he chopped up a fir tree that fell outside his home in Loxley, an Alabama town off Mobile Bay. “It felt like Ivan.”

He, along with his wife and 19-year-old son, had spent a harrowing night at home, a single-wide trailer, as it was buffeted by winds far more powerful than they had expected. “We really started feeling it after midnight,” he said.

The city of Mobile, which had virtually shut down while awaiting the storm, saw high wind gusts that caused the Renaissance Mobile Riverview Plaza Hotel, a high-rise, to sway and shudder as if it were in an earthquake. Outside, debris from damaged buildings cluttered walkways, including big panels that had flown off a valet parking overhang.

On Interstate 65, a few drivers inched their way across the high twin-span bridge over the Mobile River. Across the area, roadways had been left nearly impassable by branches and debris. On Alabama State Route 59, which heads south to Gulf Shores, northbound lanes had been cut off by large trees, leaving motorists to drive on the other side of the highway.

Officials urged residents in the area to stay at home if they were safe there, describing a volatile and perilous landscape across the region. Officials said the storm had destroyed a portion of the Three-Mile Bridge across Pensacola Bay.

Elsewhere along the Gulf Coast, there was a measure of relief. For days, the storm had unnerved a wide expanse of the coast as residents watched its projected path change considerably with each forecast.

The storm’s slow speed and capriciousness has been attributed in part to climate change, which, researchers found, has made hurricanes wetter. As the atmosphere warms it can hold more moisture. But there is evidence that it can also slow them down, enabling the storms to bombard the areas they hit with heavy rains and winds for longer, as happened with Hurricane Harvey in 2017. That storm stalled over southeast Texas and generated as much as 60 inches of rain over five days.

In 1979, Tropical Storm Claudette set a record when it dropped 43 inches of rain in Alvin, Texas, over a single day.

This hurricane season has been among the most active on record; with 20 named storms, the National Hurricane Center is rapidly running out of letters of the alphabet for subsequent storms.

On Monday, before Tropical Depression Rene dissolved, there were five concurrent named storms in the Atlantic, which has not happened since 1971, according to the National Oceanic and Atmospheric Administration.

On the Florida coast, Sally’s hard eastward turn worried Joe Hernandez so much that he stayed up through the night as the storm blew through his suburban neighborhood in Cantonment, just outside of Pensacola.

The wind wrecked his back fence and his shed, and the water climbed to waist height on some of the nearby streets, he said. The streets, too, transformed into Venetian canals, only these were flanked by wide green suburban lawns and handsome brick homes with basketball goals and two-car garages.

It might have been surreal to a newcomer, but not to Mr. Hernandez. The area, he said, had seen its share of flooding in his 18 years here, sometimes after hurricanes, but also sometimes after a normal storm.

Soon the Florida National Guard was prowling around in big-wheeled, open-backed trucks, prowling for people who had gotten stuck. Some of them began searching for people to rescue as early as 7 a.m., when the wind was still bellowing. They led people to safety who could not drive down their streets anymore. They rescued motorists stranded in the deceptively deep floodwaters.

In the late afternoon, Mr. Hernandez and his wife, Tammy Hurd, 53, were rescued from their blue S.U.V.

They had driven to a nearby house to check on a couple in their 70s. Then they made the decision to try to make their way down Bristol Park Road. Soon, their S.U.V. was submerged in floodwaters up to its headlights.

A National Guard truck found them and soon they were roaring through the water to safety.

It was not a life-or-death rescue; more like a rescue from a profound inconvenience. Neighbors stood in their driveways or on the high ground of their lawns and watched.

The truck made a big wake, pushing some of the water toward the houses and enraging some who saw the waves rolling toward them. One man stepped out of his garage, railing at the guardsmen.

Soon, Mr. Hernandez and Ms. Hurd were back home. Mr. Hernandez, a veteran of the Air Force, thanked the guardsmen effusively. He was grateful to be safe and out of the storm. Still, he worried about the S.U.V. he left stranded in the middle of Bristol Park Road.

Richard Fausset reported from Pensacola, Cantonment, Fla., Mobile, Ala., and Loxley, Ala., Rick Rojas from Atlanta, and Nicholas Bogel-Burroughs from New York. Daniel Victor contributed reporting from London, Will Wright from Jersey City, N.J., and Johnny Diaz from New York. 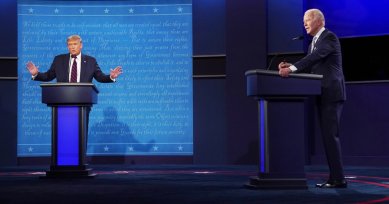 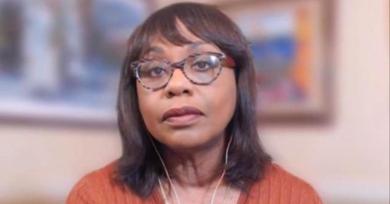 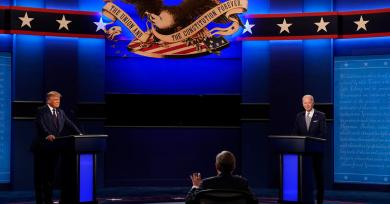 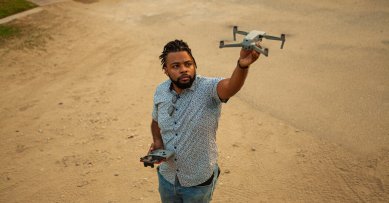 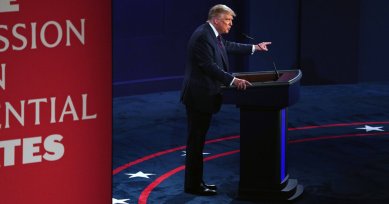 Of Course, the Debate Was Always Going to Be About Trump