US Fish and Wildlife Service plans to add some wetlands to the National Wildlife Sanctuary in New Orleans and is seeking public comments.

The Bayou Sauvage National Wildlife Sanctuary is one of the largest urban reserves in the national system, covering 22,265 acres near the eastern end of the city.

Project manager Pon Dixon said Thursday that landowners had proposed selling approximately 2,220 acres of swamps, swamps, and wildlife habitats on the western border of the reserve.

He said the area is also close to the route to the shelter and is easily enjoyed by the general public.

It is located on the other side of the shelter from about 147 acres of wetlands. Created A few years ago, where a storm pushed a swamp into the ocean.

To stay within the shelter expansion limits plan It also calls for the removal of 1,300 acres of private wetlands near the southern tip of the shelter from areas currently approved for additional potential.

Most of them fragmented wetlands are outside the hurricane protection levees and of the project Environmental impact assessment Land subsidence, erosion, storms, and sea level rise mean that further land loss can occur rapidly.

“I don’t want to invest taxpayer money in land that may not exist in the future,” Dixon said.

According to a statement on environmental impacts, the additional proposal is inside the embankment, protected from the effects of seawater intrusions and storms, and is home to migratory birds and other native species.

The Bayou Sauvage is one of the last remaining wetlands along the southern shores of Lake Pontchartrain and Lake Borgne, the agency said.

Comments must be submitted by June 23. Comments can be emailed to bayousauvage@fws.gov or mailed to US Fish & Wildlife Service.

To sign up for a free CityBusiness update Here.. 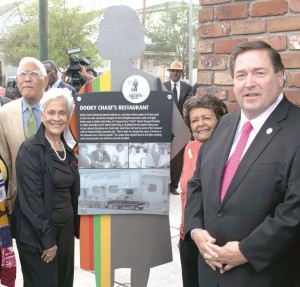