(KMOV.com) — When you need to prevent one brutal, ugly, disheartening game from turning into a week-long skid, Adam Wainwright is the guy you want on the mound.

Wainwright had played the stopper role on one prominent occasion already this season when he held the Indians to two runs over nine innings for a complete game on August 30. The Cardinals were mired in a four-game losing streak until Waino took the ball that day, staunching the bleeding with a memorable performance on his 39th birthday.

Leading the Cardinals to a 4-2 win over the Brewers in game one of yet another doubleheader Wednesday afternoon, Wainwright stepped in as the stopper once again. This time, however, he wasn’t putting an end to a long losing streak so much as he was ensuring such a streak did not develop following the brutal 18-3 loss taken by the Cardinals Tuesday night.

It’s easy to imagine how such a scenario could have played out. As of the end of Tuesday night, it seemed possible that both Yadier Molina and Kolten Wong could end up on the injured list the next morning. Molina was struck in the wrist by a Ryan Braun swing during Tuesday’s blowout, while Wong has been dealing with an issue in his oblique area. As it turned out, neither were added to the IL Wednesday, while Molina was right back in the game one lineup, catching Wainwright’s outing as he’s done hundreds of times since 2005.

Just like he did on August 30, Wainwright delivered a complete game for the Cardinals Wednesday—though he needed to be reassured afterwards that the record book would agree with that assessment. He wasn’t sure, given that this game was only scheduled to last seven innings.

“It’s nice to be able to finish a game strong, even though it’s a seven inning game,” Wainwright said. “I feel like I pitched a complete game, anyway. I don’t know if it counts or not. I don’t think it does, does it?,” he asked before being informed that he would, indeed, be credited with the complete game.

Wainwright considers that kind of mentality inherent to his job description.

“There’s a responsibility as a starting pitcher to carry your team deep into games,” he said. “If we start getting okay with going five innings, then we’re losing track of our responsibility.”

The outing for Wainwright began as though it might steer astray from the deep, productive effort he sought. In the first inning, Wainwright permitted a base hit to Christian Yelich and a home run to Keston Hiura to put the Brewers on top early, 2-0. After that inning, though, he dialed in.

Wainwright permitted a base runner in only two other innings the rest of his start. The only time he allowed multiple men on base in an inning was the fifth, when a two-out walk to Omar Narvaez and a subsequent single for Avisail Garcia threatened the 4-2 lead the Cardinals offense had scrapped to provide. With the dangerous Christian Yelich at the plate representing the go-ahead run, Wainwright was determined to stamp out Milwaukee’s two-out rally before it began.

“You know, I was still confident,” Wainwright said of his mindset heading into the key Yelich at-bat. “I knew he was starting to feel good, but there’s no way I’m loading the bases right there. I’m not pitching around him and loading the bases—too many things can happen, you know? They’ve got a good squad behind him, too. You’ve just gotta make your pitch and hope that your execution matters, hope that it works.”

Wainwright got Yelich to roll over sharply on a cutter that was fielded by Paul Goldschmidt to retire the side. From there, Wainwright didn’t permit another base runner the rest of the way.

“I mentioned before the game, leaders do lead by their actions,” Shildt said. “And actions will speak louder than words. He went out there and—think about it—he goes down 2-0 in the first after a rough night, and just bears down… Went out and just dominated, and was in complete control. Command of the strike zone. Him and Yadi, always in sync. Displays yet again the art of pitching and displays yet again what it means to be an ace—with all caps.”

Another Cardinal who displayed the depths of his dedication and ability Wednesday was Wainwright’s batterymate—you know, the guy who received the full force of a baseball bat swing to his wrist less than 24 hours hours prior.

Wainwright said that he checked the team’s internal communications app on his phone for the Cardinals lineup as soon as he woke up Wednesday—three guesses whose name he found listed at the catcher position.

“I checked it, and I just started laughing as soon as I saw his name in there,” Wainwright said. “He texted me last night, ‘Hey, biggest game of the year tomorrow.’ Which is what I say the night before I pitch, I always remind the guys, ‘Hey get some sleep, biggest game of the year tomorrow.’ He texted me that, and I thought, ‘Is this guy gonna leave the x-ray room and catch the next day?’ I mean, it just was, it doesn’t surprise me at all because he’s probably the toughest person I’ve met in my life—not even probably, he definitely is. He’s amazing.”

It’s not like Molina merely went through the motions Wednesday, either. With perhaps some level of uncertainty regarding whether Yadi might be compromised swinging a bat the day after he was bludgeoned with one, Shildt slotted Molina ninth in the Cardinals batting order for game one.

True to form, Molina ripped a sharp single through the left side of the infield his first time at the dish Wednesday afternoon.

“And he got out there and got a knock in his first at-bat,” Wainwright said with a laugh. “That’s incredible, man.” 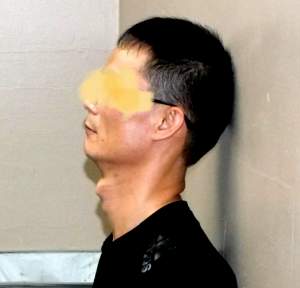